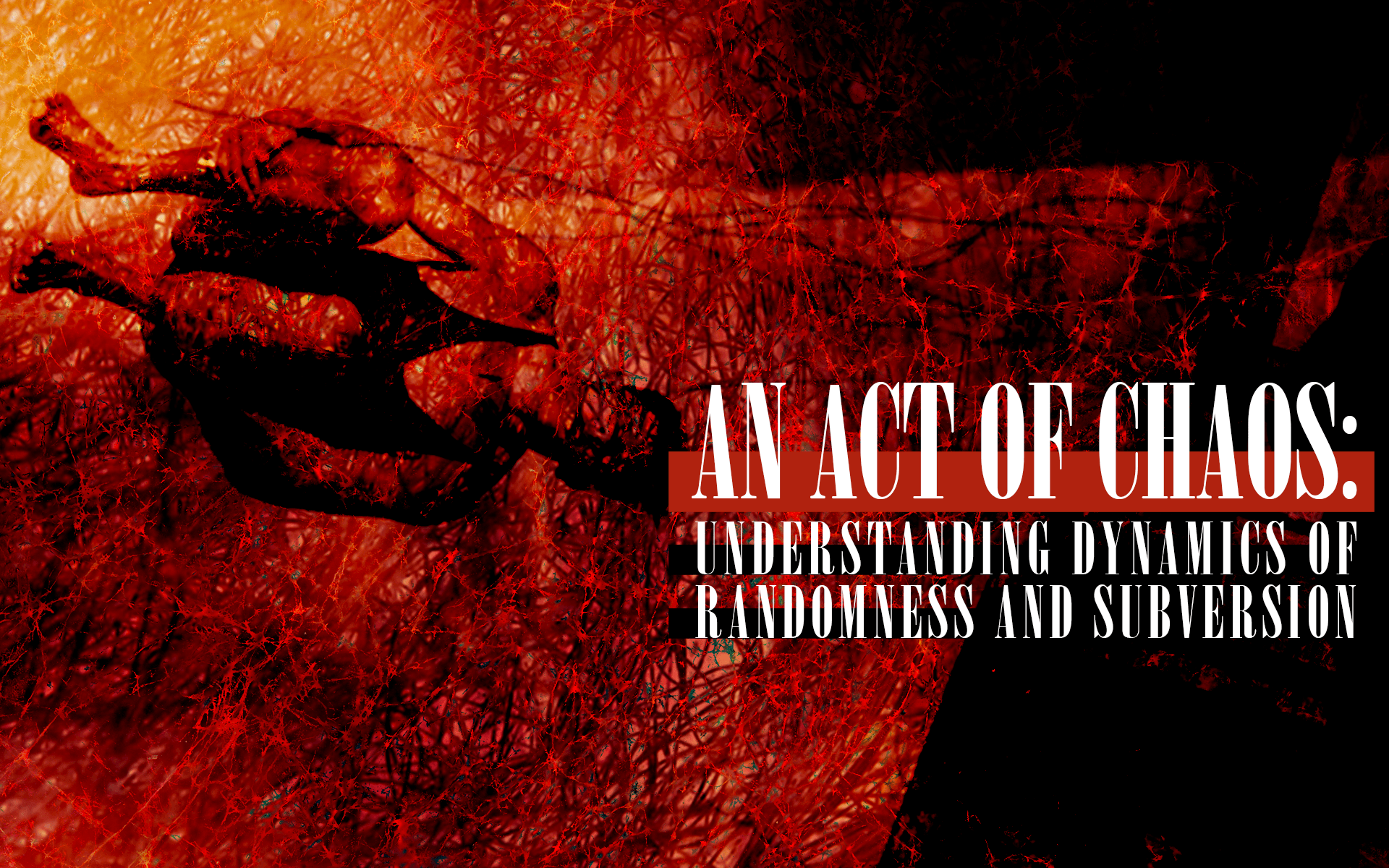 In this issue we talk to Northwestern University School of Education and Social Policy Ph.D. student Kit Martin about complex systems; that is, where the interactions of heterogeneous subcomponents generate emergent — what we might call ‘random’ — phenomena. In particular, Kit’s expertise is on modeling ant systems and the educational uses of such models, especially in understanding how randomness, chaos, and subversion act in human complex systems.

Hi Kit, thanks for making the time to do this interview!

What drew you to complexity science?

I was a history major in college and I studied national political economy, [in particular] 15th-century Ottoman studies. It’s a very interesting Empire — the predominant empire in the world between the fall of Constantinople and the rise of European sea power.

Map of the Ottoman Empire during the height of its power | Source: Wikimedia Commons

I was looking at the [Ottoman] decline in relation to how the world worked [and how] big things changed out from under them. It used to be that the system of global trade moved by land through Asia and they were smacked dead on that. It used to be that the center of European power was in the Mediterranean using galleys, but that shifted dramatically to the Atlantic. It used to be that bows and arrows were the most effective technology — and they held onto that technology longer than anyone else — but gunpowder overcame them.

So they didn’t really do anything wrong — they just didn’t change the way they interacted with the world. I got interested in them, but my methods were hard [to implement when looking] at these emerging patterns, because I was looking for a historical reference or somebody who was [already] talking about it, and no one knew what was happening. It was just like, “The price of silver is going out of whack because of the introduction of lots of silver from the new world,” so you had to go find a current source that talks about that when that [topic] wasn’t a [popular] consideration. So I thought, “Couldn’t we model that? Couldn’t we try simulating that?” I started building little historical simulations to try to explain [the phenomenon], and moved towards complex simulations.

For an audience that doesn’t work with complex systems, can you give us a brief walkthrough of why this field matters?

My thought is [that] the reason complex systems is more prevalent today than it was in the past is because of the human technological advances. Though we could have thought about a more complex world before, we didn’t have the need to. [I think] it comes about because we live in a more multipolar world than we ever have before. Maybe in the past, we had [lived] like a single colony — where everything kind of gravitated around it — and we looked towards that as the major center for our lives. But with the expansion of globalization and travel being shorter, we have a lot more influences on how things connect.

So, when we start considering how the Amazon gets affected by the off-winding of the Sahara across the Atlantic and how nutrients go between those two systems, and how they’re contingent on each other, we start having questions that are bi-directional, global issues and we need a way of approaching that. It’s a non-linear relationship and it oftentimes emerges from small, localized actions having a global impact. Kind of like the butterfly effect, I suppose.

I’m thinking of particles in a system and their collisions — or a simple example: the trajectories of a billiard ball. When a billiard ball smashes into another billiard ball and goes off in some direction, that direction seems random until you know the exact velocities, and exact frictions, and air tensions and that sort of [information]. Some of those things matter more than others. But, if you get the fundamental variables [right], you can explain quite accurately the exit trajectory of both billiard balls. And I see the same kind of thing with human interaction. If you knew the cognitive state of the participant and if you knew the experience [of the participant] — if you knew these things which are very hard to know in our current measurement environment, or you track them well enough over time — I think you could make very good predictions of these emergent, what you call ‘random’ behaviors.

So I wouldn’t see them as random. I would say there’s a lot more causality in how people behave in reaction to each other than we might think, if we just knew more about the underlying variables. Which is why I study ants, I suppose. To look at social systems where it’s not so biased. We [humans] think we’re kind of willful, and I believe we’re not as willful as we’d like to think. I think we fall into systems much more than we would like to admit.

But ants don’t fight it? They’re just like, “Yeah, I’m part of the system”? Yeah, ants just go. We want to say they’re mechanistic and they don’t have individual will, and they’re just kind of like bio-machines. And people are quite happy with that interpretation of them.

Do you ever use the same sort of mechanism for ant modeling for human modeling?

I’d argue that you could. I think it’s a hard sell [though], because people don’t want to see themselves as so mechanistic. I don’t think we’re aware of our tendencies towards that as much. When I’ve submitted papers on this, people want to say we’re more complicated. And they want to say we [humans] have nuance.

From a social psychology perspective, that’s funny, because we just show over and over that people respond to the environment in a mechanistic fashion! Even if they admit the tunnels are randomly made based on localized action — that no one meant to do it — and that there’s a certain system that’s oppressing some of them, I don’t know if there [would be] any ants who are agitating under systemic constraints and realizing [that] if they just bored a tunnel from here to here, everything would be better for their subclass.

We humans do have this faculty of recognizing patterns; having this conversation; recognizing where we are. So there are people who are change agents — who try to see the system for what it is and its effects. Having a pivot point strategy; you find a fulcrum and you move it because it’s extra effective, for example. So the question is, are the people who do that just instruments… I don’t know.

Thinking about the butterfly effect again, can one person really have such a distributed effect?

But, if you do get one of those harmonic effects where lots of things move to a society, and then people start behaving that way together, you could get these [butterfly effect situations]. It depends on what level you want to look at these things, I suppose. It feels kind of like [Leo] Tolstoy’s last chapter of War and Peace, where he talks about Napoleon and the Russians, [in particular] the reason why, when Napoleon invaded, the Russians won and the French lost. It’s not because Napoleon was either a great commander or a failed commander, nor was it because the Russian command structure was better. It’s because every French soldier at one moment, [and being] very close to each other, decided to leave Moscow — and every Russian soldier [decided] to keep chasing them. Each French soldier gave up at a crucial moment, and the Russians did not. Why didn’t the Russian soldiers change their mind and move back and stop chasing and let the French reorganize? It wasn’t the command structure that did it, it was a bunch of individual contingent choices having to do with fear and life and expectations of the future. The individual choices. Was there a pivot point? Was there a comment someone made that changed the way the conflict happened? Or did the conflict happen because the individuals involved each made contingent localized choices about their betterment — about what they wanted; about their own desires? It’s hard to say.

Thanks for your time Kit!

Ph.D student at Northwestern University School of Education and Social Policy, specifically in theLearning Sciences with the Center for Connected Learning and Computer-Based Modeling. His research focuses on complex systems – where the interactions of heterogeneous subcomponents generate emergent phenomena. One really powerful tool for modeling and understanding this kind of system is NetLogo, developed by Kit’s mentor, Uri Wilensky. Kit, in particular, focuses on modeling ant systems and the educational uses of such models. Chasing Chaos and its Ping-Pong Ball 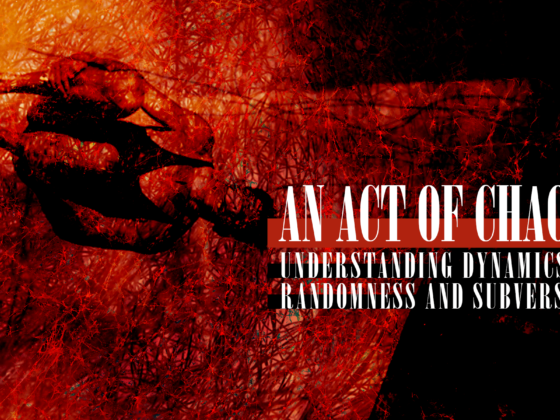 Staring into the Void: How Religion and Philosophy Address Chaos

Make Space for Public Space to be Public