There are mystics who talk about what Heaven is like. Never stemming too far from metaphors and riddles, they say that Heaven would be something like an eternal moment. A never ending combination of bliss, wonder, and wisdom that would see all things become one, become whole, both forever now, and forever then. It terrifies me like nothing else on Earth can. On the surface it feels absurd. Why would anyone be afraid of Heaven? Heaven is the consolation, the gold star at the end of a well-lived life; it is what gets us through our fear of death. But does it? I ask you, dear reader, does eternity makes you comfortable? Does it make you feel safe? 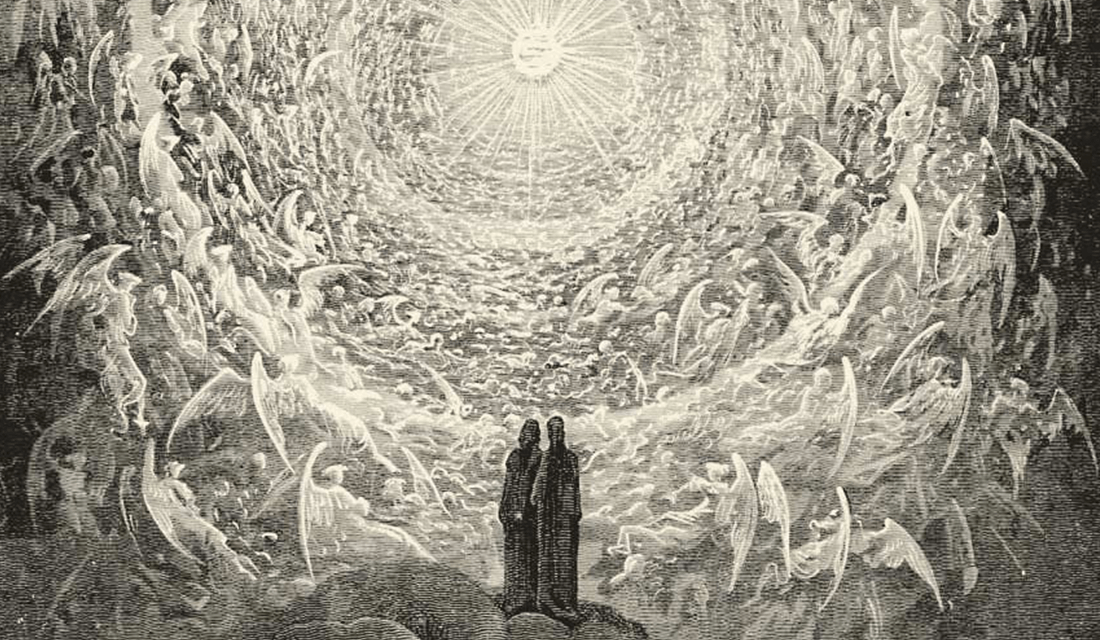 The Empyrean Heaven as illustrated by Gustave Dore for Canto XXXI of The Divine Comedy by Dante Alighieri | Source: Wikimedia Commons

In my morbid moments I wonder what it is about death that scares us. The quick and easy answer is “the unknown,” or, better yet, its twin sister, “change.” Hence a Heaven. A plan, a course of action, an expected or at least hoped for outcome makes us all feel a little bit easier. But I want to explore what it means to have that plan in place. 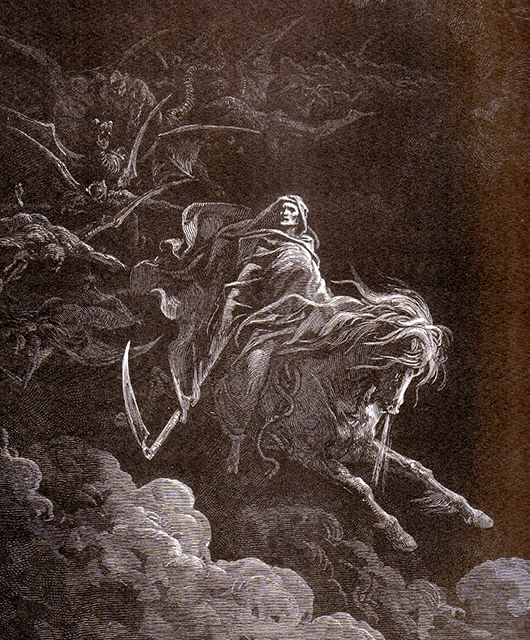 One of the four Horsemen of Death as illustrated by Gustave Dore for an 1865 illustrated version of the Bible | Source: Wikimedia Commons

The classic critique of the spiritualist’s views on the afterlife stem from the lived reality. If, there is indeed a Heaven, so the criticism goes, then why do we mourn? Why do we avoid death? We should embrace it with open arms and with large smiles. Clearly then, we don’t actually believe Heaven as much as we’d like to. This blasé criticism is moving toward an important conclusion, but ultimately the wrong one — like realizing you need a screwdriver, but failing to realize what type of screwdriver you need at this particular moment. A more interesting view would be to consider that they do, in fact, believe in Heaven, and it is this fact of Heaven that they fear most. I realize I’m beginning to speak in riddles, like my mystics, so in the interest of clarity, I’ll state to you a thesis. It is not change we are afraid of when we fear death, nor is it the unknown; it is the fact that death is final, determined, and unchanging that we fear. We loathe the well-concluded novel without an epilogue; we despise the idea of time being “over.”

We embrace the unknown more often than we realize. What we abhor is the everlasting.

What I am suggesting as well is that we have been using our words wrong for quite some time. When it comes to death, change, the unknown, and routine, we speak in platitudes. Axioms. Walls of seemingly self-evident truth built to defend us from our greatest enemy: the heebie jeebies. All of this without realizing that what we speak of is at best a paradox, at worst a complete inversion of what we think we know.

Take routines for example. The opposite of change. What exactly does a routine do? Our initial impulse might be to claim that routine helps us organize time. It provides us the ability to fit the things we would like our time to contain in such a way that it maximizes it. But if we consider the institutions that rely on routine, what do these institutions tell us about what we are really doing? Routine is the essence of a prison — not because it is a punishment, but because it makes time pass. A strict routine has the capacity to collapse time, to pull us out from underneath it, like a table cloth from a set table. Our lives, interests, and cares remain in place, perched perfectly on the table, and the concern of time is gone. Only a small wobble of a candelabra tells us it was once there.

A military relies on routine. Not only because discipline is essential on a battlefield, but because, again, it grants timelessness. It collapses time into a simple, manageable, indefinite “now.” It staves off all concern. Monks, even more obviously, rely on routine specifically to simulate this kind of timelessness. The Catholic phrase “we wait in joyful hope” comes to mind. It is, like prison, a means to make time disappear. But why is it that not a scary thought, but death — with its same collapsing of time — seem somehow more inherently spooky?

A fear of death is the most assured evidence of living. 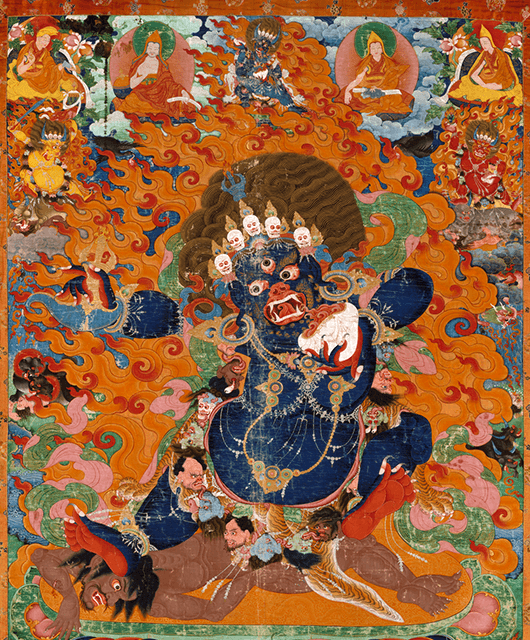 Yamantaka, Destroyer of the God of Death (from Buddhist philosophy) | Source: The Metropolitan Museum of Art

The answer is change. Routines are defined by their inability to be maintained. A prison sentence ends, be it through release or death itself. The monk also welcomes death because it ends the timeless death they were previously living. For a soldier to be effective, they must eventually spend time not in their routine, lest they begin to appear inhuman, lifeless — dead.

What all of these examples do is welcome death as if it is a fact of life, precisely because during life they denied themselves an essential element of living: change. They don’t fear death precisely because it is a change, something different than a carefully constructed, time-erasing routine. We like change. We need change. When Hamlet contemplates the afterlife, he hopes for a dream. Dreams are where change is most pronounced in our minds. A dream is one long state of change, wherein nothing is stable from moment to moment, everything always manages to be new, while being recognized as if it’s old. And while, yes, dreams are capable of frightening us too, no one has ever woken up from a dream and been bored. If at this point you’re asking yourself, “Is my fear of death just a profound fear of boredom?” Well… yes! I mean kind of. Boredom involves a certain fidgety-ness, a dissatisfaction with the present moment’s ability to entertain you. Beneath that dissatisfaction, though, is a whisper of a thought, a haunting echo just behind your ear that says, “It will be like this forever.” It’s why a traffic jam makes us angry.

It is not change we are afraid of when we fear death, nor is it the unknown; it is the fact that death is final, determined, and unchanging that we fear.

Freud talks about a death drive. Regardless of how we feel about Freud, the death drive is an interesting idea to consider when we’re thinking about why it is we fear death. What our Austrian friend noticed was that as much as human beings are interested in creating, they are also interested in destroying, often self-destroying. Given its destructive tendency, this urge was named after death. But I’ve always thought that it should be renamed to something more like a boredom drive. We destroy things once we grow tired of what has been created. We get that whisper in the ear again; “It will be like this forever.” So we precisely make sure it does not continue forever. We wonder why we did the destructive thing that we did, confused as to who the enemy really is. We think in our daily lives we are combatting change. We are preventing the unknown, planning, preparing for a “what if,” when in reality, change is our closest friend. We embrace the unknown more often than we realize. What we abhor is the everlasting.

Our most moody and existential thoughts stem from boredom. Is this all life has to offer? The answer “yes” implies that you are stuck with things as they are indefinitely. What’s the point of all this? The question implies that you are not — for lack of a better word — entertained. Our deepest existential fears stem from a combination of life’s inadequacy, and times inevitable march. They are moments of existential boredom. By no means am I detracting from these moments. They are difficult, powerful questions, as much as they can be a bit melodramatic. These are moments when we are standing over the edge of cognitive precipice, looking out over an abyss.

But if we are going to be staring into the abyss, let’s know what it is we are looking at. We aren’t looking at the unknown. We know exactly what it is we see. We see permanence. We see a point in time after which nothing changes. And so the abyss stares back at us, offering eternity when it was never asked for.

Beneath that dissatisfaction though, is a whisper of a thought, a haunting echo just behind your ear that says, “It will be like this forever.”

“Time is a flat circle.” If you’ve seen True Detective or Westworld, you’ve probably remembered this quote. It’s memorable because so much is compacted into the idea of a flat, circular time. It’s a view of time that often evokes dread. Its power stems from its ability to rob us of our sense of change as well as our sense of freedom. Everything we have done we will do again; everything we will do we have already done. The feeling of change and motion we feel in life — the feeling that our choices have effects — is a lie. We are basically already dead. While I don’t subscribe to the idea myself, its quiet creep from philosophical aphorism to HBO plug-line is telling as to what it is we are actually scared of. If this makes your gut lurch, and gives a shiver, good. I’m right there with you. I am equally spooked.

Which brings me to my final point. I’ve yet to make any of us feel better. Surely, there is a point at which I will go about articulating how it is to overcome this fear, or at least manage it. It’s fine to articulate our fear, but what about actually addressing it? I’m afraid here I can be of no help to you. Death is scary. The unceasing marches of time into oblivion are, yes, scary. That isn’t going to go away. If there is an answer to how should one handle their fear of death, I will only say that surely such an answer exists in life. It would exist amongst the highs and lows of happiness, and sadness. Dissatisfaction, and fulfillment. Ambition, and laziness. Excess, and lack. A fear of death is the most assured evidence of living. It won’t solve the heebie jeebies, but that’s OK. The feeling of dread in the pit of your stomach is you telling yourself you have skin in this game. That you have something to lose. That, at least for now, life is very, very much worth living. And, at least for now, that’s enough. 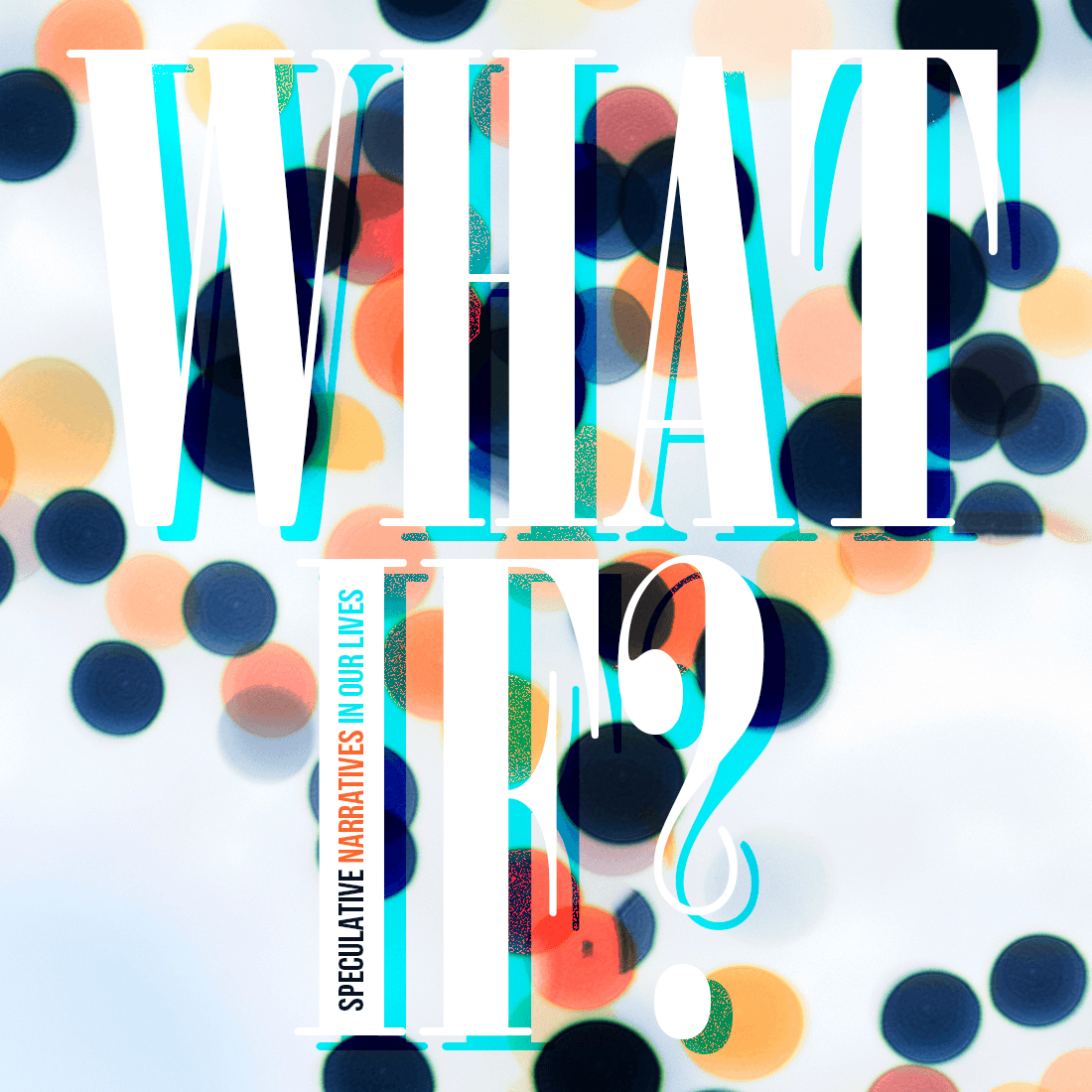 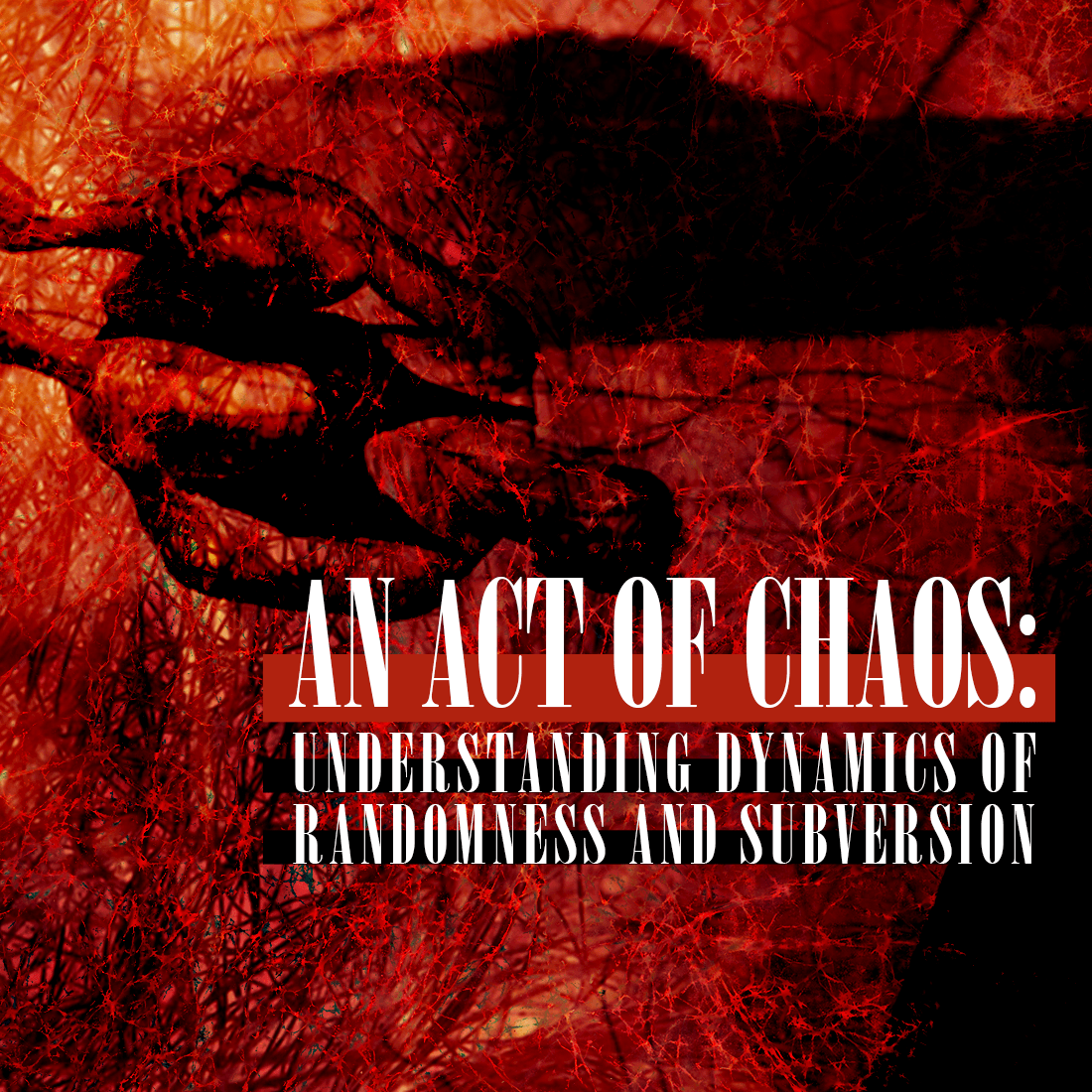 Staring Into the Void: How Religion and Philosophy Address Chaos 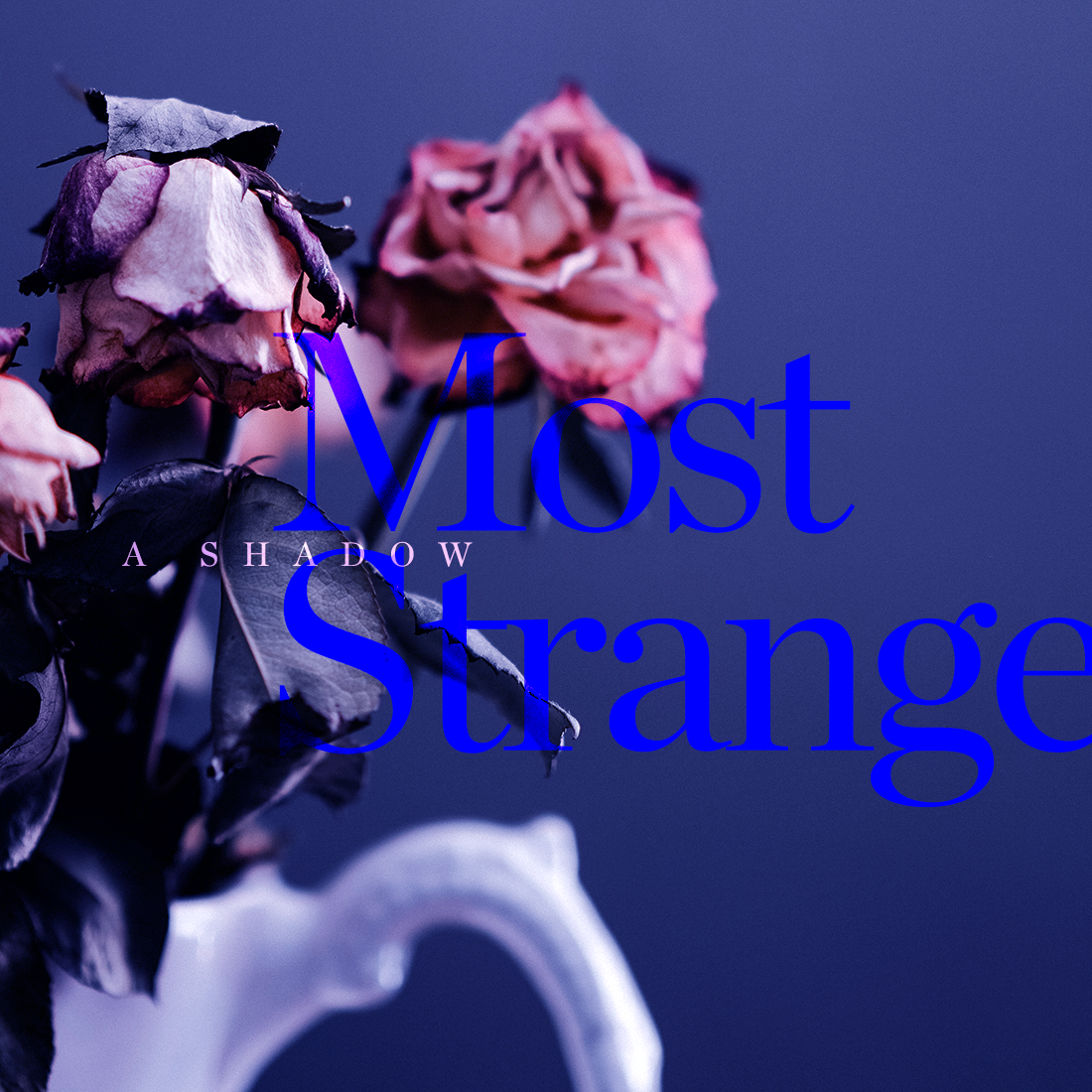 A Shadow Most Strange